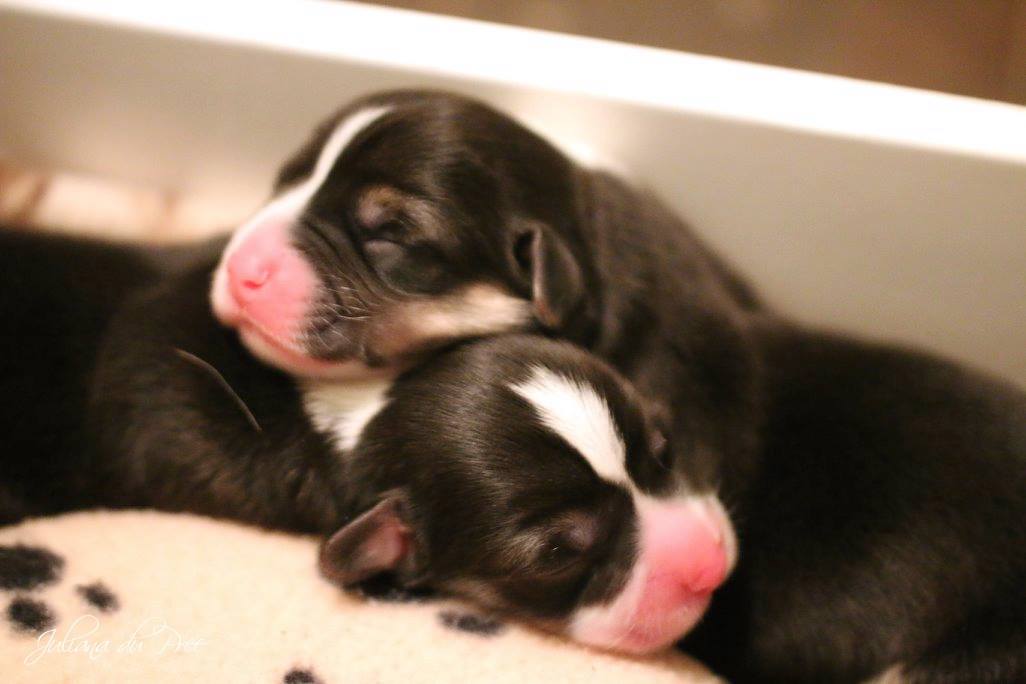 Due to the size of the puppies visible on x-ray and Sprout’s family history of having large puppies, we chose to have an elective c-section to ensure the health and safety of pups and mom. This meant monitoring Sprout’s temperature every couple of hours up to a week prior to her due date. Thankfully I’m my own boss and can bring my dogs to the office with me, much to the chagrin of the building manager! Sprout had a significant temperature drop (at least 1 degree) at 4:30pm, this means first stage of labour was beginning. We quickly arranged with my vet clinic to bring her in and do surgery before most the staff went home for the day. I work with a fantastic and experienced clinic that has reproductive specialists on staff and am lucky to be good friends with one of the Techs who is also a breeder. Sprout’s puppies were born around 7pm that evening and we were home within a couple of hours.
For those of you keeping track that adds $1000 to the cost of the litter so far. 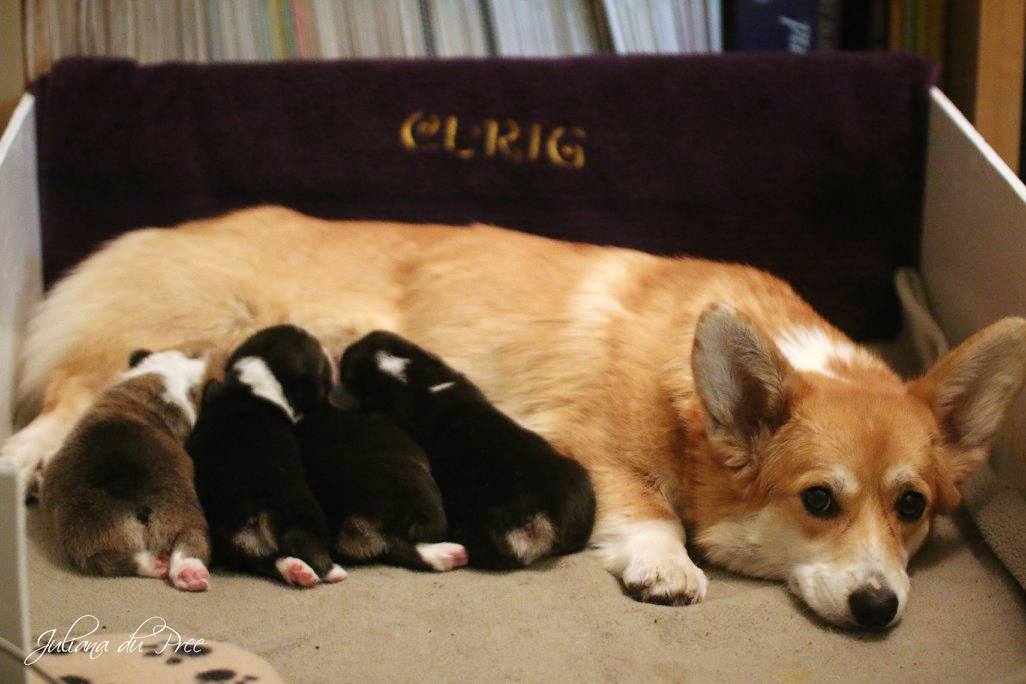 The first week of life is the most fragile. Puppies are blind, deaf, and unable to regulate their body temperature. It’s essential they are kept quite warm at all times, and have food a minimum of every 2 hours or they could become hypoglycaemic. At 1-2 days of age tails are docked and dewclaws are removed surgically by my veterinarian. I’m not here to debate this topic, so please don’t bother bringing it up. Puppies are weighed 2x a day to ensure they are thriving. If a puppy loses weight or shows other signs of problems, they will be supplemented with a milk replacement formula via a baby bottle or tube fed if they are too weak to nurse. We also handle puppies a lot as a form of early neurological stimulation. Nails are trimmed for the first time. I don’t get much sleep in the first week.

Puppies are born with no pigment and Tricolours are almost black and white at birth. Pigment begins to show in spots on their noses and mouths and fills in over the next month or so. It eventually will show on their paws and bellies as well when they’re older. Tris, particularly RHTs start to show more tan on their cheeks. Weights are being checked and recorded 2x a day still. Eyes and ears start to develop around 10-18 days old and will crack open when they are ready. Nails are trimmed again.

Because nothing is ever easy when raising a litter. Westley aspirated some milk when he was nursing. Over a couple days he dropped weight and was feeling weak and listless when picked up. He was rushed to the vet where he was checked out (and I was calmed down - one tends to get over zealous and overly emotional after losing far too many puppies in recent years). Westley was put on antibiotics, a supplement to help counter “fading puppy syndrome” and was bottle fed for about a week. Thankfully he bounced back and is doing well.
vet visit cost approximately $75 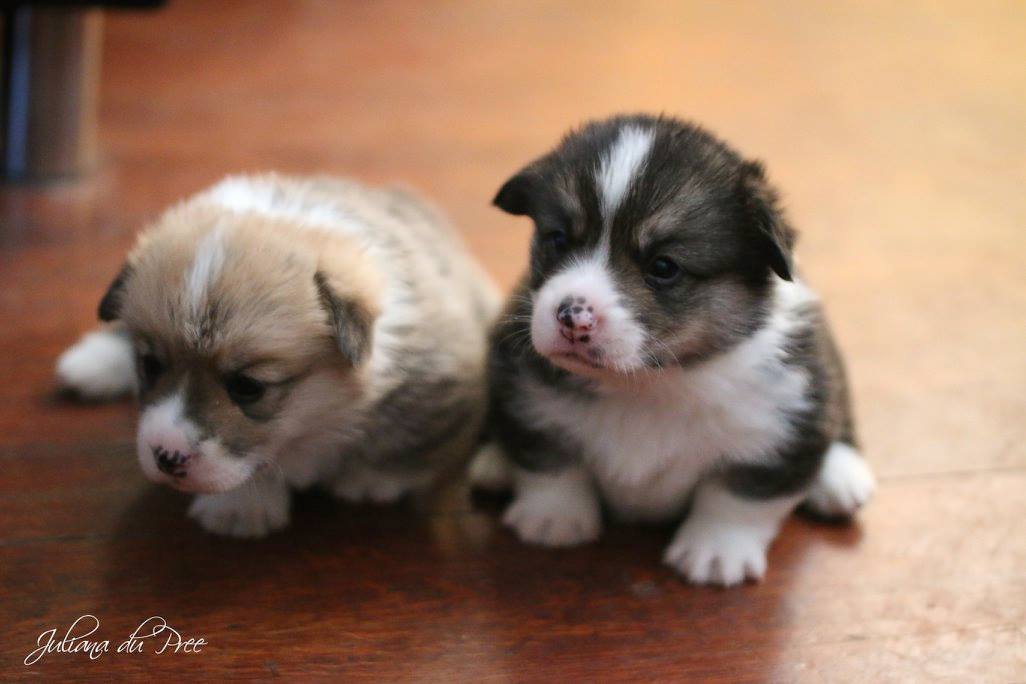 Drunken Sailors! One of my favourite stages of puppyhood. Once they can see and hear they start to move around more and start to explore their surroundings and interact with each other and me! There is a lot of stumbling, falling over, splatting, and of course my favourite - barking for the first time and scaring themselves. It’s adorable.
“Solid” food is introduced for the first time. The first meal usually consists of Rice Pabulum and formula. The first time food is introduce I feed each puppy individually with a spoon until they seem to understand how to lick and not suck. They’re not coordinated at all, and falling into and aspirating their dinner can be fatal. Nails are trimmed again and they are given a dewormer for the first time.

New Digs! Puppies are moved out of their whelping box into a larger pen with room for exploration and play, and well… poop. Puppies can now regulate their own body temperature, and mom is cleaning up after them less. Things start to get messy now. We try to loosely follow the rules of seven for socializing puppies. By 7 weeks of age, they should have eaten or drank out of a variety of dishes (ceramic, metal, plate, bucket etc), should have walked on a variety of surfaces (carpet, hardwood, lino, grass (uh.. not at this time of year!) snow… ), have had toys of different textures and types. You get the idea. The pups are let out to explore my house at their own pace. It’s a bit overwhelming at first, but they quickly get over their first steps out of their safe place and start to experience new things. Their food is slowly changed from pabulum and formula to Honest Kitchen (a dehydrated raw food). It’s a nice mushy slop with small chunks to teach them now to get those new teeth working. Mom is still nursing occasionally and sleeping with the pups at night. Nails are trimmed again. (seeing a trend yet?) 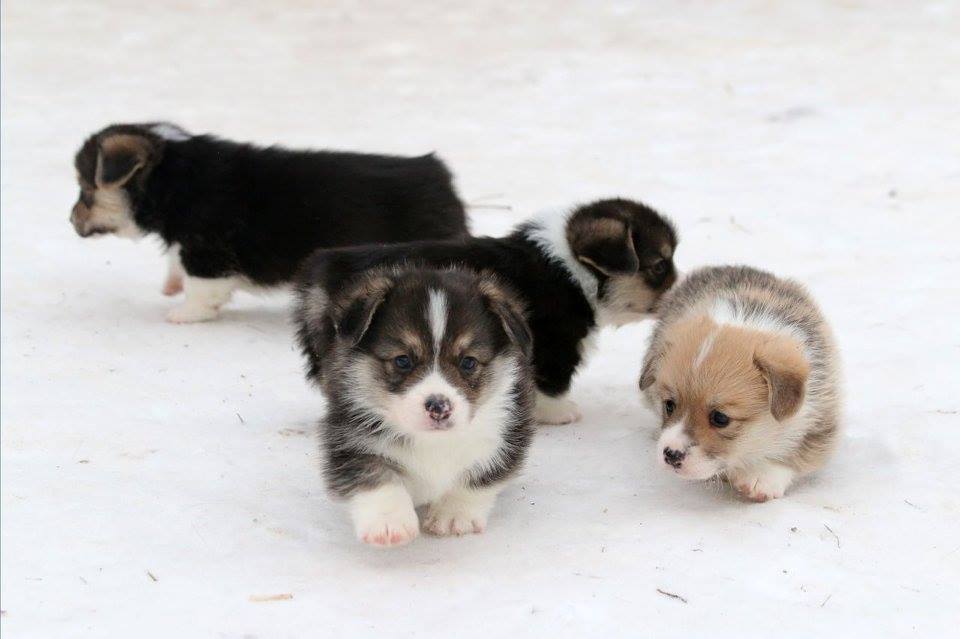 They’re introduced to safe adult dogs under close supervision. In this case their dad Wicket and aunt Leia. It is instinctual for some older and more alpha dogs to not tolerate puppies and they can kill them if you’re not careful in some circumstances. Their Great Gpa Heath goes not like puppies so he will not be allowed near them unless he is on a leash. He’s basically the grumpy old man who sits on the porch and yells “Get off my lawn!”. Regardless, both Wicket and Leia love the babies are are helping mom teach them how to play and interact with other dogs. Puppies got to go outside in the snow a couple of times in week 5. It’s a bit cold for them so they’re only out for very short time periods. They did discover that snow is fun to eat!

The babies get to be out for a lot of the time while I’m home and I’ll often have to go searching when it’s time to put them to bed. They like to find places to sleep (like under the couch, behind the bookcase etc) that mean I have heart attacks trying to find the ‘lost’ puppy. Mom has said “Screw this! I’m outta here!” Sprout’s nursing a couple times a day when they manage to catch her, but no longer sleeping with them at night. They have teeth and she’s working on slowly weaning them. I go through amazing amounts of paper towel, cleaner, and rolls of newsprint for their pen. Their name morphs from puppies to poopies at this age. They're introduced to the puppy bathing station aka, the kitchen sink as inevitably someone steps in or sleeps in something they shouldn't. Gross. Nails are trimmed again. 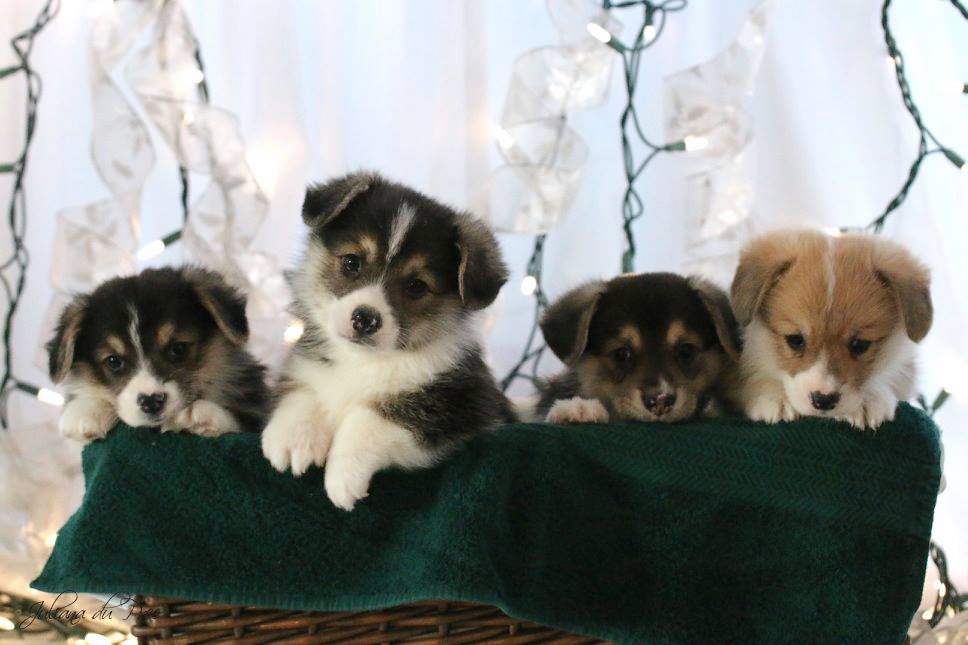 Temperament tests. While we have a pretty good idea what the personalities on the puppies are at this point, we will often do a more formal temperament test. The one we use is based on the testing developed by W Volhard. It measures basics such as how social a puppy is, how they react to new situations, to dominance etc. The testing is very basic and only gives a general idea of the pups disposition and how it might benefit from certain things as they grow. It helps us determine what type of home to look for for that particular puppy. A confident and smart puppy should likely go to an experienced home who will know how to direct the pup and provide proper training and guidance. If left to ‘rule the roost’ this type of puppy could become unruly. A puppy that is leery of new situations will need a home that is willing to do proper socialization and training to boost their confidence. 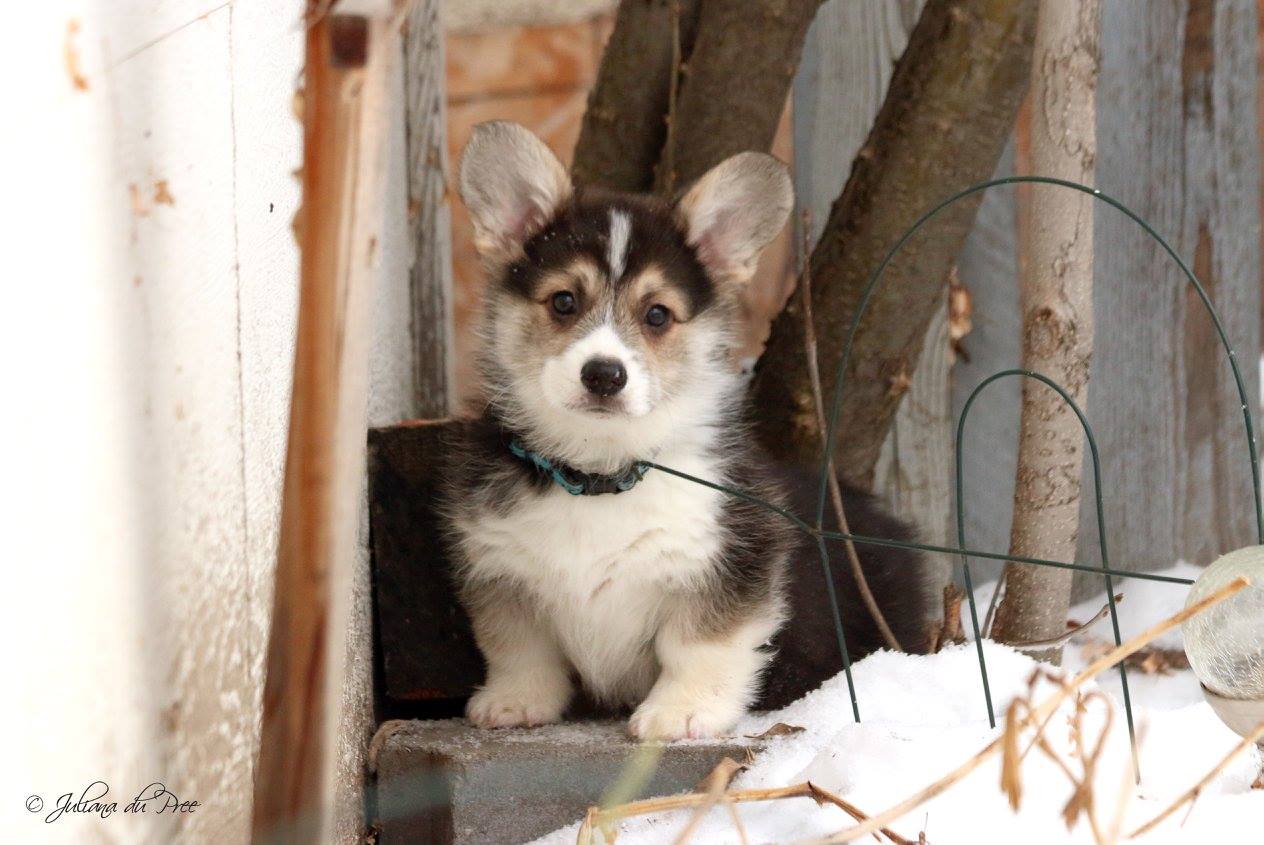 Formal photos & Assessing structure. When puppies are growing we look for certain things from a structural standpoint. Every breed has a standard that calls for specific structure that ensures the breed is capable of easily performing the task(s) they were bred for. In the case of the PWC, we are looking for a long, low silhouette, with sufficient shoulder and rear angulation to be able to move efficiently for hours on end. We want them to LOOK like a corgi and not a basset hound, so head type is important as well as the other things that make structural soundness. A dog with lots of angulation in their front and a straight rear is going to be unbalanced and mean they could be prone to increased risk of injuries. In essence this is why a dog from a show breeder is often more sound than one from a BYB or pet breeder. We care about these things!

When a pup is about 8 weeks old, their growth patterns take them close to what you will see as an adult dog. We also find our lines are more obviously at this point a few weeks later at 10 weeks. Thus we have taken formal photos for assessment for generations. Knowing how now adult dogs have grown from their puppy photos allows us to compare and look for virtues or faults we may specifically want to avoid. This album shows some comparisons of these puppies with other relatives.

First Vet visit. At about 9 weeks we take our litters to our vet for an over all health assessment. Their hearts, lungs, patellas, eyes, ears etc. are all checked by my veterinarian. First vaccinations are administered and microchips are inserted. I follow a limited vaccination protocol with my dogs as set out by respected veterinary immunologist Dr Jean Dodds. Microchips are registered both in my name and their new owners with the microchip company and with the Canadian Kennel Club.

Decision time. Very patient puppy people have been waiting for weeks and weeks for me to make some decisions. It was a lovely litter which meant splitting hairs between which pups would stay to be show potential and those that would go to companion homes. I was extremely fortunate to have two families who both have dogs from previous litters, both have children of my heart dog - Jo. These pups are Jo’s great great grandchildren. I chose Westley (now called Odin) and Inigo (now named Vaughan) to go to these families.

The babies have all shed their puppy names, and will be properly registered with their formal names soon. We choose to register each litter with a letter of the alphabet to help track siblings over the years. This is “O” litter. I chose one registered name to follow our Flora naming tradition after our foundation girl “Flower” that all our dogs go back to, and the other for the celestial name of their sire “Jupiter Rising”. Staying with me to grow up are Buttercup (now called Olive or formally “Curig FaerieTale Over the Moon”) and Fezzik (now called Liam or formally “Curig FaerieTale Oleander”).

The tally so far:

total: $4500 - $5700 2 puppies were placed for a total of $2400, leaving me over $2000 in the red on the lower end of the estimate. These costs do not include feeding a high quality food, toys, and other supplies necessary for the care of the litter and their mother. So the next time you want a bargain on a puppy, think again. A reputable breeder is already subsidizing the cost of your puppy and giving you so much more.

I hope this series has shed some light on the process we take to produce a litter of healthy and sound puppies. It’s long, emotional, research intensive, and expensive! But each and every puppy produced is loved and brought into the world with care.

Curig FaerieTale Over the Moon - Olive 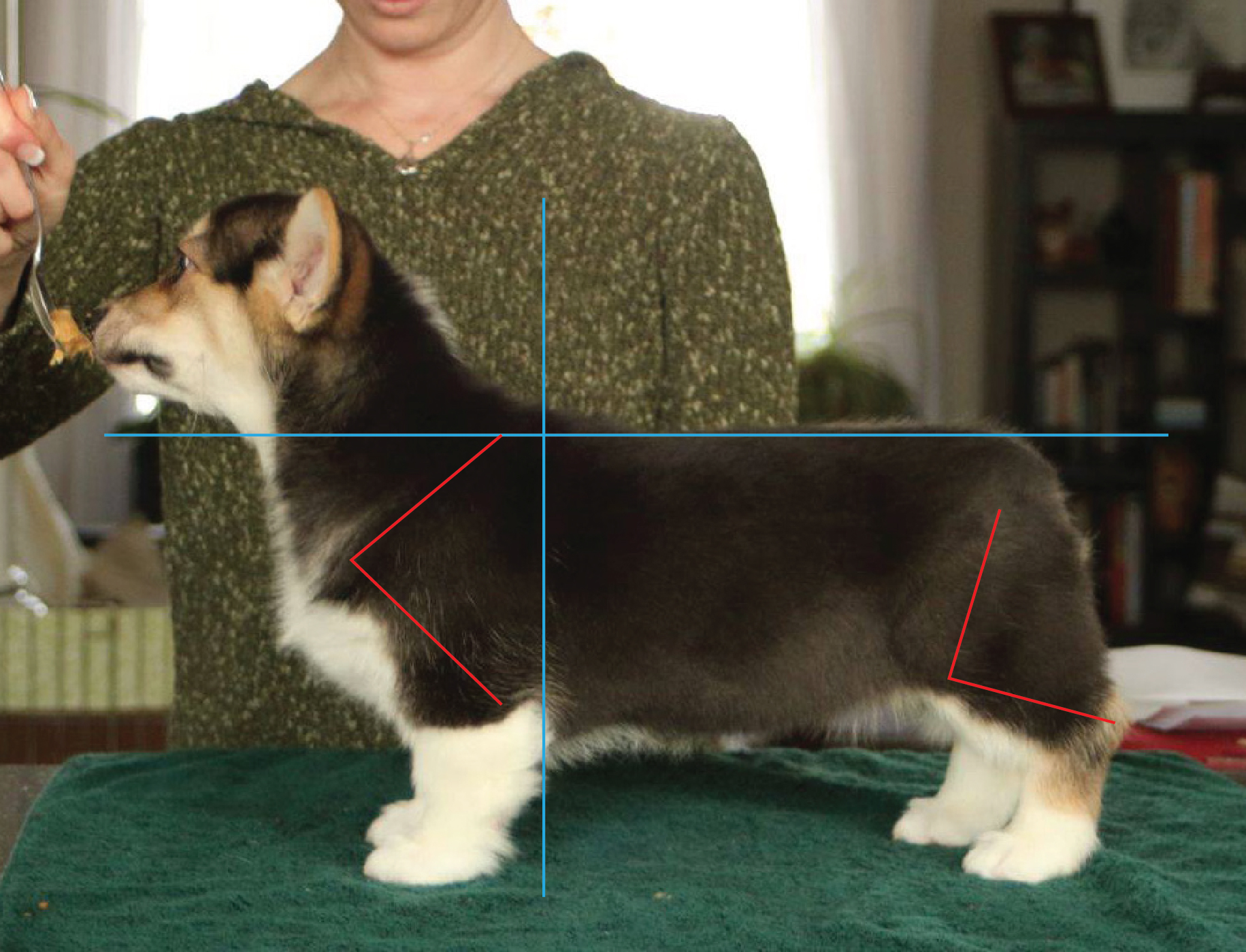 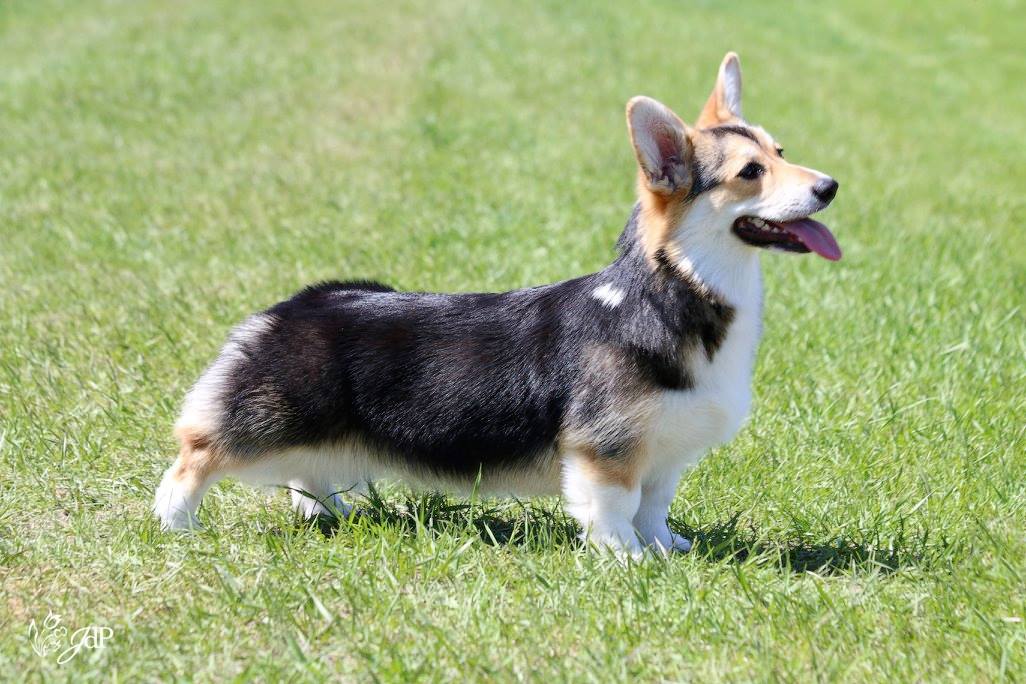 Olive at her first show at 6 months old. 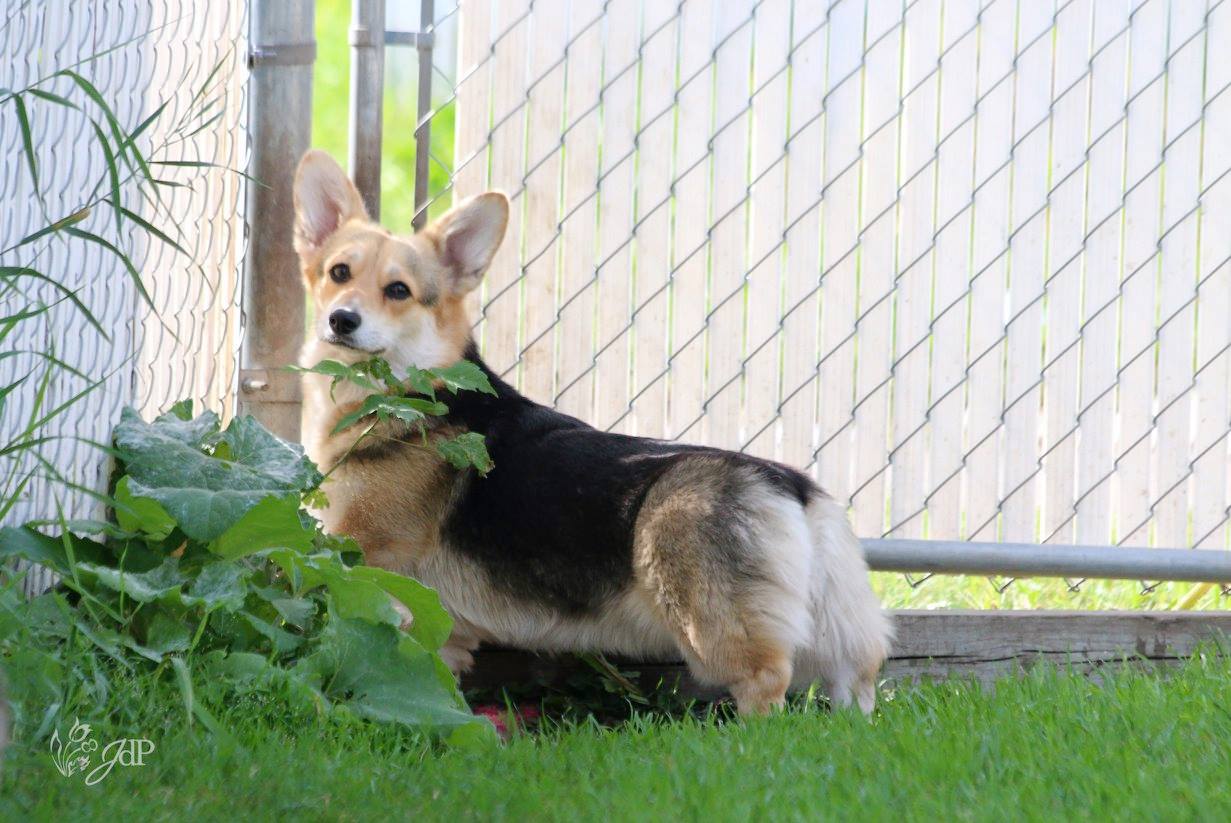 Olive at 18 months old showing some of her early promise. We hope she continues to grow on to be part of the next generation in the future.